An article on green gold

Most of us would be aware of yellow gold, white gold and rose/pink gold, but how many know of green gold?

Green gold first has to be looked at as being a very soft green colour. Donâ€™t expect the green colour of the gold to be as rich as an emerald green colour, rather a more delicate soft hue.

Gold in its purest form is a very bright yellow that is quite malleable and easy to be worked with. Indeed pure gold can be hammered so thin, that 200,000 sheets would only be one inch in thickness, and one single ounce of gold can be drawn into a wire an astonishing one mile long.

Because of its rich golden colour and softness, gold is alloyed with other metals to increase its hardness and alter its colour.

Rose or pink gold as it is also known is produced by adding copper as its main alloy to produce a lovely warm rose colour that achieves a wonderful patina over time, and the alloys in white gold have changed over the years mostly due to the cost of others alloys such as palladium which was the alloy of choice in the early 1900â€™s, whereas now manganese, silver, palladium, nickel or a combination of the metals are used. 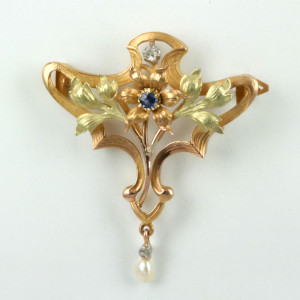 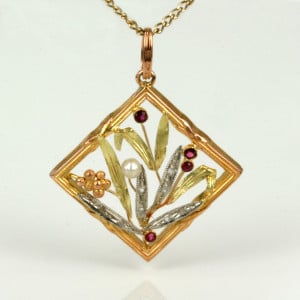 Two Art Nouveau pieces with green gold being used (as well as rose and yellow gold). Look how wonderful these pieces accentuate the form of nature.

Green gold was produced sporadically in during the 1800â€™s and mostly in the late 1800â€™s by adding silver as well as cadmium, however the major drawback with cadmium is that it releases toxic fumes when being melted, a problem that was not really known to the jewellers of this period.

However once alloyed, green gold is completely safe to handle, its danger only lies in the alloying/melting process. 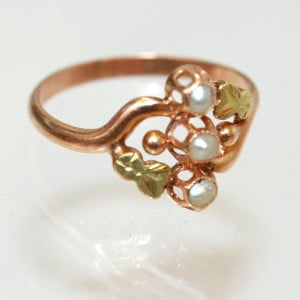 Â Another piece of jewellery with green gold. Note the ring uses the green to simulate leaves.

Because of the danger associated with producing green gold, it only made a very brief appearance in the history of jewellery however it coincided with a wonderful style at the time which suited its use so well, the Art Nouveau period of the late 1800â€™s to early 1900â€™s.

As mentioned before, the green is only a quite soft colour so it will not take up the entire piece such as an entire ring made from green gold, rather it will often be used to accentuate features. This was most often seen in jewellery from the Art Nouveau period which is easily characterised by its free flowing natural lines taking a lot of inspiration from nature and green gold was often used to highlight areas of a piece of jewellery such as “leaves” made from green gold in a brooch.

The jewellery from this era that incorporated green gold was mostly brooches and rings, and many of the brooches will be in sterling silver which allows the green to contrast nicely against the silver background.

As can be seen in many of the images, the green although soft in colour really looks quite stunning against rose gold and silver and does have a distinct colour making the pieces even more special.

There were also quite a few pocket watch dials often for women that will have green gold around the edges that makes them very attractive.

Very little jewellery is around with green gold, however it is a fascinating area to explore and obtaining jewellery featuring green gold always makes a wonderful talking point.