Article about Regard and other acrostic jewellery

As well as the passion that goes into the collecting of antique jewellery, there is also much that has gone into its creation throughout the centuries. Here we examine a most romantic and sweet form of jewellery that has remained popular over many years and is a wonderful window into the past revealing how a person expressed their love for another in a somewhat secretive way. 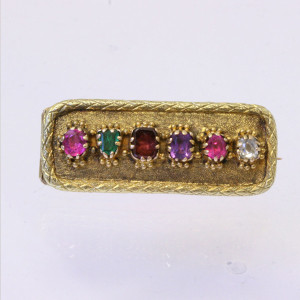 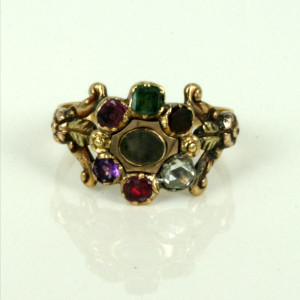 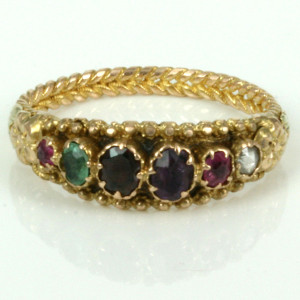 However, acrostic jewellery became most popular during the mid-19th century during what is known as the Romantic era. In France at this time the common words found in acrostic jewellery were often â€˜souvenirâ€™ (remembrance) and â€˜amitiÃ©â€™ (friendship). In England, this form of jewellery is most often be found in brooches and rings known as a â€˜regardâ€™; which would feature a ruby, emerald, garnet, amethyst, ruby and a diamond, or perhaps the word â€˜loveâ€™ would be made, the piece being set with a lapis, opal, vermeil (an old name for hessonite garnet) and emerald.

In the collection of the V&A is an acrostic pendant dated to around 1830 that has the stones of a lapis lazuli, glass in imitation of an opal, vermeil (the old name for garnet ) and an emerald which spell â€˜loveâ€™.

Other romantic sentiments found in acrostic jewellery can also be found in the form of â€˜dearestâ€™ and â€˜adoreâ€™ jewellery. Jâ€™adore (love), was spelled out in a ring with jacinth, amethyst, diamond, opal, ruby and emerald gemstones, set in that order. Sometimes, the gems would be interspaced with seed pearls representing tears. 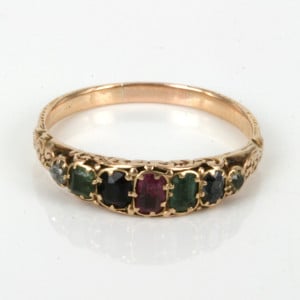 Many rings and bracelets were also made in which stones spelled out the names of loved ones a number of items commissioned by Napoleon Bonaparte, for example, used this formula in charming ways.

Following his return from Egypt in 1799, he commissioned a spectacular sculpted and jewelled piece of artwork in the form of a clear quartz crystal sphinx. Set upon a silver base containing 114 precious stones, Napoleonâ€™s â€˜good luck charmâ€™ featured stones arranged in a specific way formulated on an ancient code. Into the design are encoded the words â€˜Emperorâ€™ and â€˜Empressâ€™ as well as the initials of both

Napoleon and his wife Josephine Bonaparte and the date 15 August 1802, commemorating the simultaneous nationwide celebration of Napoleonâ€™s 33rd birthday and his elevation to Lifetime Consulate status. His second wife, Empress Marie Louise, had three acrostic bracelets made by Chaumet. The stones spell the first names and dates of birth of Napoleon and Marie Louise, and the dates of their meeting and subsequent marriage in 1810.

Another similar form of jewellery, while not strictly acrostic jewellery, is â€˜AEIâ€™ themed pieces where a locket, for example, will have those three initials meaning â€˜Amity, Eternity and Infinityâ€™ to represent everlasting love.

All of this lovely acrostic jewellery given to loved ones is still considered very romantic to this day.