Home / Articles / Vintage Vs. Antique: Is There a Difference?
‹Return to Previous Page

Vintage Vs. Antique: Is There a Difference?

Many people confuse the term “vintage” with “antique” and this article hopes to clear up the differences between the two.

Something vintage isnâ€™t necessarily an antique -just because your grandmother owned and wore it, doesn’t make it an antique piece of jewellery.

Antique jewellery, is, by strict definition, more than 100 years old.

The popular TV series â€śAntiques Roadshowâ€ť explains, “antique” is, “generally speaking, an object of considerable age valued for its aesthetic or historical significance. In the antiques trade, the term refers to objects more than 100 years old.”

This can go back as far as 470Ad when a piece of jewellery before that is termed a piece of antiquity.

As Australia follows the British monarchy, we will often find jewellery from the Georgian (1714 to 1837) period onwards. These are as follow:

Victorian: Ruled by the popular Queen Victoria, she was until the current queen passed her, the longest reigning monarch spanning 63 years.

Some jewellery is defined by its style rather than an exact age.

By definition a vintage piece of jewellery is one that is over 20 years old but less than 100, however if it can be grouped into a classification, then it should be used as it is more defined.

The Art Nouveau era started towards the end of the 19th century and lasted until the start of World War One and is typified by free flowing lines taking inspiration from nature as well as non-European countries and regions such as the Middle East and Asia.

This period is stylised by swirls, delicate curves and asymmetrical designs. As much of the inspiration was taken from nature it provided a form of expression which seemed to be unlimited.Â There was the use of dramatic and exotic as motifs.Â  Orchids, irises, snakes, dragonflies and sensuous womenâ€™s heads were common

The Belle Ă‰poque era and the Art Nouveau era coincide so closely together that it is actually quite hard to make a distinct separation between them. Making it even harder is the fact that the term Belle Ă‰poque did not come into common language until after the period had finished.

Another main difference between the two eras is that Belle Ă‰poque jewellery tends to use more precious metals such as platinum and predominantly diamonds as opposed to other gemstones or materials as is seen in Art Nouveau jewellery.

Although a new design unto itself, it stills seems to hold on to a more Victorian style of having more symmetry than Art Nouveau jewellery, although this may be somewhat stylized by non-symmetrical edges or borders.

Belle Ă‰poque jewellery and indeed the era can be looked upon as an era of somewhat grandeur and decadence and a fore runner to the Art Deco period of the 1920â€™s.

The Art & Crafts movement in jewellery design started in England and spread quickly to other parts of the world, but was particularly embraced in America.

The movement was mostly started by the artist and designer William Morris as a movement against society and art, and was a move towards a utopian society with their art referred to as â€śPre-Raphaeliteâ€ť.

The jewellery from this era is similar to that of the Art Nouveau era, however the metal of choice by most jewellers was silver and gemstones were more often than not cut en cabochon as opposed to facetted.

Enamelling also was widely used in many pieces and nearly all of the jewellery of this time had two other distinct looks and features namely the silver was often blackened, oxidised or simply not polished all over and secondly the pieces often have a â€ścrudenessâ€ť about them, a simple somewhat amateurish style to it.

In contrast to the flowing lines of the Art Nouveau period, the Art Deco era became very symmetrical in its designs however it moved away from the â€śprettinessâ€ť of the Victorian era.

The Art Deco style is probably the easiest artistic styles to recognise, with its very straight lines, angular work as well as angular cut stones, stepped edges, arced corners, and â€śshapes in a shapeâ€ť where a round diamond may be set in a hexagonal setting for example.

In 1922, a discovery was made that would send shockwaves around the world, from both a historical point of view, as well as designs in not only jewellery, but fashion and even architecture. On the 4th November 1922 Howard Carter discovered the tomb of King Tutenkhameun. This discovery showed to the world the wonderful use of mixing colours and shapes that coincided so perfectly with the ethos of Art Deco jewellery, and bought to the jewellery world the term â€śEgyptian revivalâ€ť.Â Diamonds remained the main gemstone often with sapphires, rubies or emeralds in well-defined, geometrical designs.

Another characteristic of the Art Deco movement was to combine bold, contrasting tones like black and white.

Diamonds and gemstones were fashioned in new shapes: baguette, emerald, triangle, shield, pear and marquise among others.Â  The European cut diamond was still being used along with the newer modern or round brilliant cut.Â  Although platinum had been discovered in the 1700â€™s, it wasnâ€™t really until the start of the 1900â€™s that it started coming into jewellery manufacture.

The Wall Street crash of 1929 brought international financial disaster.Â  The crisis was coming to an end by 1936, but World War II loomed ahead, bringing the fun-loving sophistication of the Art Deco period to an end


Retro describes jewellery produced between the later part of the 1930â€™s to the 1940â€™s, and also includes World War II.Â  The styles and designs of the Art Deco jewellery still influenced designers in this era.

The retro movement was can be considered to be started by the head of Christieâ€™s jewellery department, Francois Curiel.Â  He named the era for customers who requested jewellery with the Retro look.Â  His realization of this era brought great popularity and prestige to retro jewellery, resulting in the increase in value and price to these designs.

Retro jewellery can be easily characterised by large chunky somewhat over the top designs in not only brooches and bracelets but also rings. The use of rose gold was also quite common even in 18ct.

Here are some gorgeous examples of how to make the distinction between antique and vintage: 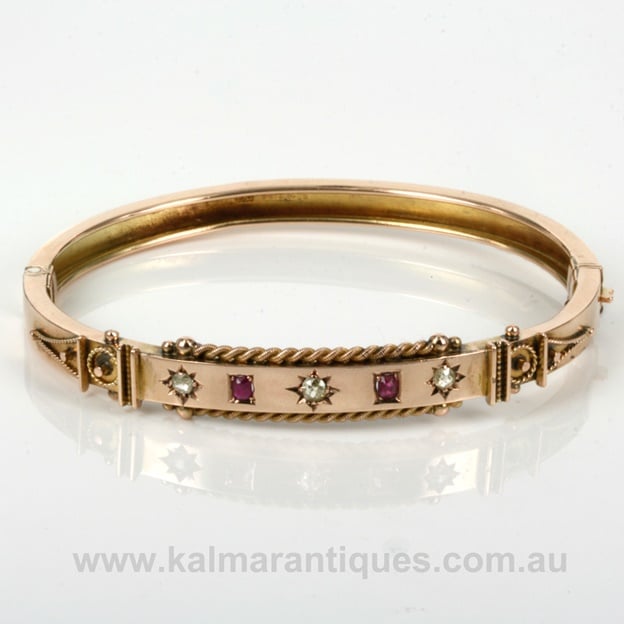 This extremely sweet and lovely 9ct. rose-gold bangle with beautiful detail, two rubies and three diamonds was made in Birmingham in 1896. This bangle is if you guessed antique. 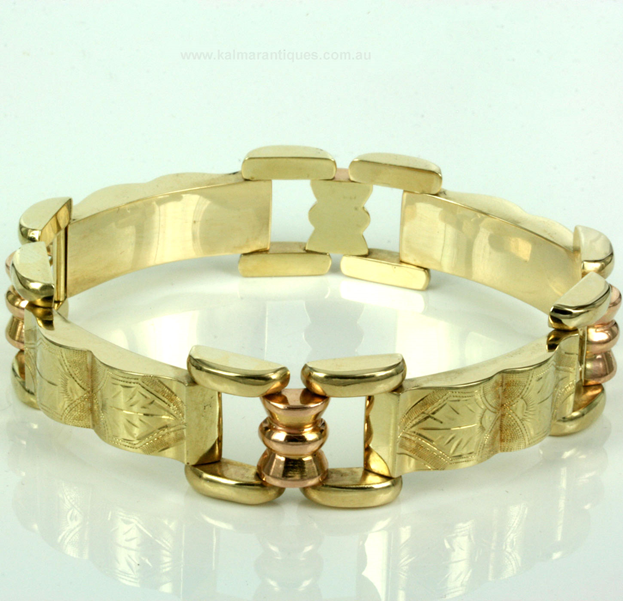 This elegant, detailed 14ct yellow- and rose-gold Austrian-made Art Deco bracelet, with a Viennese town mark, was made in 1940. This bracelet is vintage. 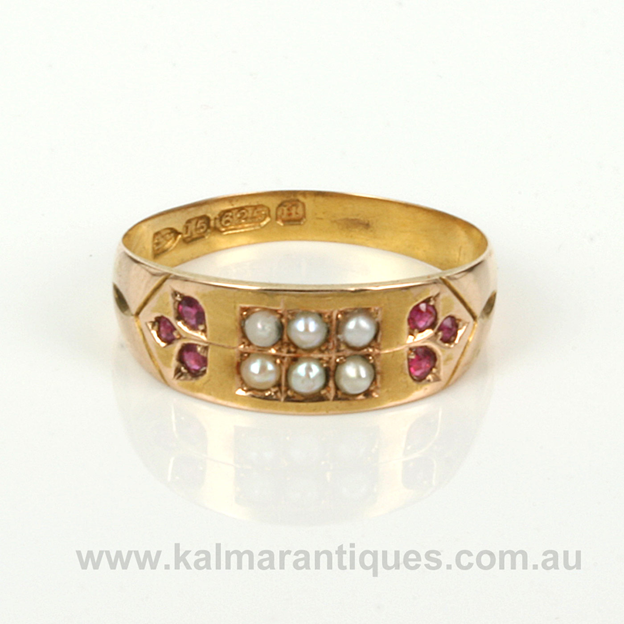 Hereâ€™s a beautiful ruby-and-pearl 15ct-gold ring. Six pearls and six rubies adorn the ring, made in Chester in 1891. This ring is antique. 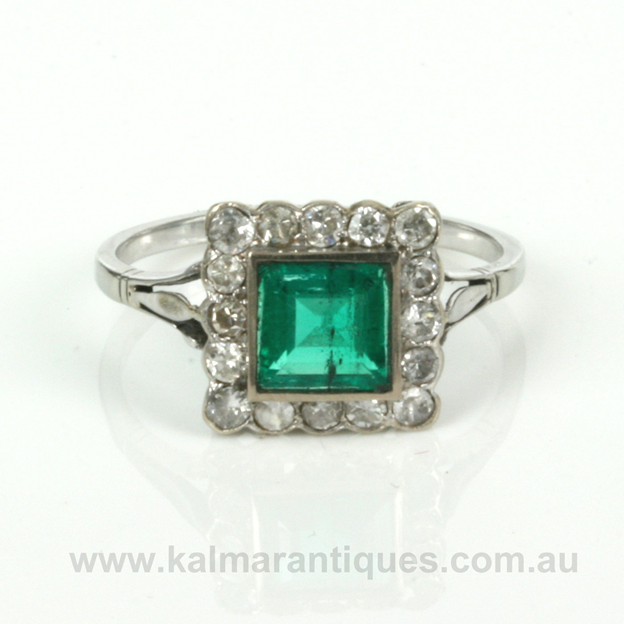 This 1930 Art Deco ring, which features a stunning square 1.05ct Colombian emerald surrounded by 16 diamonds was handmade in platinum. This ring is vintage.

So there you go. Youâ€™ve been schooled and now know the difference between antique and vintage jewellery. Now apply this knowledge to your jewellery shopping.