To kickstart The Kalmar Vault series we begin with two significant pieces of Australian jewellery history. From the Kalmar’s private collection comes a fantastic pocket watch and Albert chain from acclaimed jeweller and watchmaker, Mr. Henry F Hutton. “The business founded by Henry Hutton around 1880 became one of the premier retail jewellery establishments in Ballarat, Victoria.” (Cavill, Cocks & Grace: 1992).  The town of Ballarat in Victoria was one of Australia’s most significant gold mining towns during the mid-19th century. The gold rush saw prospectors migrate to towns such as Bathurst, Buninyong and Ballarat. This brought an influx of many Colonial jewellers who settled and set up businesses in the towns. Hutton worked out of his shopfront on Stuart Street in the second half of the 19th century between the 1880s to late 1950s. It was there that Hutton gained notoriety for his quality jewellery and skilled watchmaking.

Although the Kalmar’s have owned other pieces of Hutton’s work this exceptional Albert chain and pocket watch is a piece which remains in their private collection. “Because of its great rarity, Australian jewellery of the nineteenth and early twentieth centuries is now eagerly sought after by collectors and museums alike” (Schofield, A & Fahy, K: 1990). The pieces are not only of exceptional quality but have fantastic significance to Australia’s history.

The Albert Chain:  Albert chains were originally created for the purpose of fastening a pocket-watch to a men’s waistcoat.   Named after the style of watch chain worn by Prince Albert the chain traditionally comprised of a T-bar at one end that would affix to a button hole and a swivel hook at the other to attach to the pocket watch.  This Albert chain is of this traditional design but with exceptionally ornate detailing.

“One thing which distinguishes Australian jewellery of the mid-nineteenth century is its generous use of gold which was so abundant. Australian gold watch chains, based closely on the type made popular in England by Prince Albert, are usually much heavier than the English ones: the same principle applies to Australian gold fob seals and brooches” (Schofield, A & Fahy, K: 1990).

Crafted in 18ct yellow gold the piece features two twisted chains held in place with two sliding mechanisms. At the end of the chain hangs the traditional T-Bar and ornate chain tassel. Each surface of the gold has incredible hand-engraved details which feature beautiful floral patterns. A ‘Hutton’ maker’s mark can be found embossed on the bottom bail of the chain.

The Pocket Watch:  The pocket watch case, also crafted in 18ct yellow gold, features exceptional detailing on either side. On one side, a shield with an ornate wreath of floral and filigree engraving surrounding it. The other side, features the same wreath pattern but with a bouquet of flowers in the center. The watch-face is also decorated with floral designs and roman numerals upon the dial. Sitting underneath the centre twelve are the words “Henry F. Hutton Ballaarat”, this is interesting as it not only depicts the maker’s name but also the traditional spelling of the city, which later dropped the additional ‘a’ from its title. 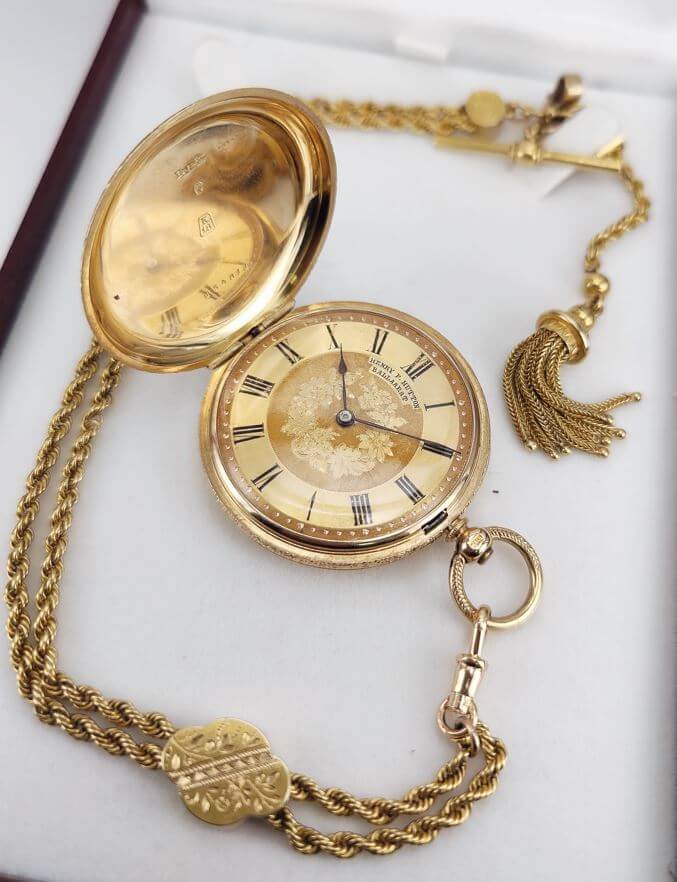 The Vault: Pocket Watch and Albert Chain by Australian Jeweller ...
by Teaghan Scott
January 6, 2022
In Conversation: Highlights from the 2022 Catalogue with Damien Kalmar
by Teaghan Scott
December 7, 2021

Fine Antique and Modern Jewellery, watches and Objets d’Art at the Queen Victoria Building in the Heart of Sydney city.
Download Now