We are able to restore not only watches and pocket watches but also clocks and here is a fantastic example of one of the best restorations that we have ever undertaken on completely restoring an antique clock and in this article you will be able to see the before and after photos of this magnificent antique French clock.This particular French clock came in to us in the condition that can be seen on the photos on the left hand side. It had been sitting on a window sill on Sydney’s Eastern suburbs for over 30 years overlooking the ocean and where the window was often left open exposing this clock to the elements including salt in the wind coming off from the ocean which as can be clearly seen had taken its toll on what was once a magnificent antique time and strike clock.

The case was incredibly worn down to the metal, the movement itself completely rusted and seized up, a wing broken off one of the cherubs and the front enamelled panel cracked.

To begin with the clock was completely stripped down, the movement removed as well as the hands and the enamel panels carefully removed.

To our clock maker and our complete surprise, under one of the panels was a magnificent find of extraordinary importance.

There was the original receipt from Godin in Paris in 1867 for 2 Francs 90 centimes who were the makers of the enamelled panels.

Finding this is a real treasure as it pinpoints the exact age of the clock and adds so much to the clocks provenience.

As to the movement, it was restored to original full working condition including fitting new mainsprings and now keeps impeccable time and strikes on the hour and half hour.

The case was washed, sand blasted, primed and gilded in over 5 layers of 24 carats gold leaf and the base was relined with new velvet as well as being gilded in gold.

The rear wing that was missing was cast and welded on and the front enamel panel pushed back as close as possible. 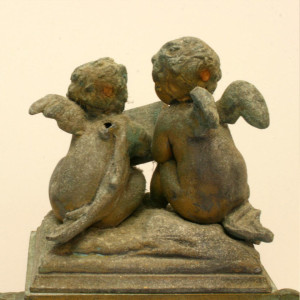 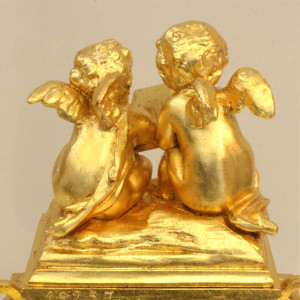 The rear of the clock showing one of the cherubs with its missing wing which was remade and welded on. 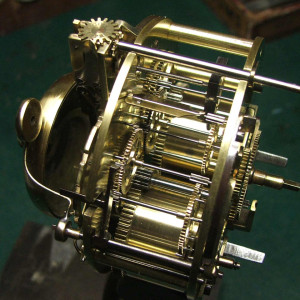 This is an image of the movement in our workshop after its full clean and restoration.

This was such a pleasure to restore this clock and after several months of hard work and due diligence this antique clock is now back to its former glory and looks magnificent is a great example of what we can do if you have an antique clock that is in need of restoration.

And here is the clock that is now for sale: French antique clock made in 1867 by Phillipe Moures

The Vault: Pocket Watch and Albert Chain by Australian Jeweller ...
by Teaghan Scott
January 6, 2022
In Conversation: Highlights from the 2022 Catalogue with Damien Kalmar
by Teaghan Scott
December 7, 2021