Here in this article we will look at the colour choice of metals when choosing a diamond engagement ring.

We will concentrate on white gold or yellow gold.

(For an article on the difference between platinum and gold, please click here

Let’s look at the why these two colours are used in diamond engagement rings.

In different countries the purity of the gold may change for example in most Western countries 18ct is common yet in many Asian countries and Middle Eastern countries 22ct or even 24ct gold jewellery can be found readily.

As this is set into the minds of many people, often people will associate a rich yellow gold colour as a sign of wealth and this will of course apply to a diamond engagement ring.

White gold was not invented until after 1900 and therefore is still only a 100 or so years odd years old give or take, and in the world of antique diamond engagement rings from the Victorian era of the 19th Century and earlier, there will never be one made in white gold.

When white gold came into the jewellery world in the early 1900’s, this also coincided with platinum now being used in jewellery as well, and both of these metals gained more popularity during the wonderful Art Deco period of the 1920’s.

For example white gold and platinum easily “won” over yellow gold in the 1920’s and 30’s, however by the time of the Retro era of the 1950’s yellow and indeed rose gold became much more popular and really stayed this way until the 1980’s and more so during the 1990’s when white gold came back to be the colour of choice.

However one thing has remained unchanged for centuries in most countries – the diamond or diamonds must be set or surrounded in a white metal to help retains its “whiteness”. A diamond surrounded by a bezel or claw in yellow gold will have some of the yellow reflect back into the diamond.

Jewellers prior to 1900 overcame this by setting the diamonds in silver and post 1900 in white gold or platinum and that is why there are many diamond engagement rings made with yellow gold bands but white metal settings. 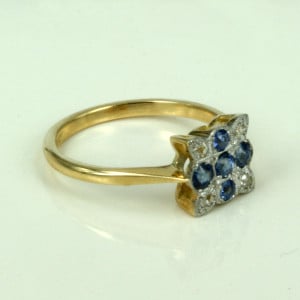 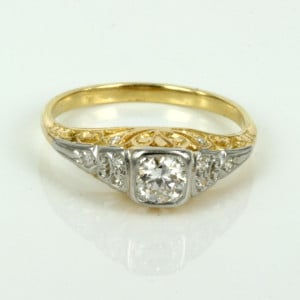 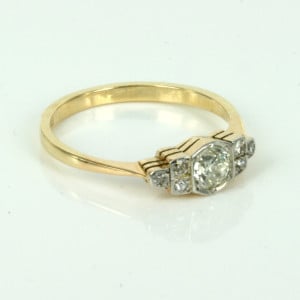 Look at the diamond engagement ring on the left – the white metal (in this case platinum) is very easy to see. The diamond engagement ring in the middle has the platinum there but harder to see but look at the ring on the left. The platinum is very hard to see and indeed in this ring wasn’t meant to be seen easily rather is used just to help keep the diamonds as white as possible. Click on the image to open it in a new window and even enlarged, it is still not very obvious.

Overall the colour of metal for the band of your diamond engagement ring will likely be governed by fashion at the time, however one thing will likely remain – the the diamond will be set or surrounded in a wonderful rich white gold or platinum.

« What is the difference between platinum and gold?
What to look for in a diamond engagement ring part III »